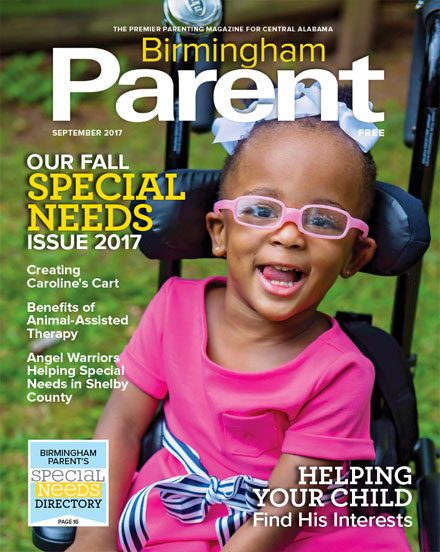 Don’t Stick Stuff Up Your Nose! How to Keep Your Child From Putting Things Where They Don’t Belong and What to Do If It Happens

Picture this: During dinner on a quiet Wednesday night, your two-year-old, Sarah, begins complaining that her nose hurts as she starts to cry. You lean over to take a look, hoping that she’s not coming down with a cold. And then you see it. Your blood runs cold as you realize that while Sarah watched her older sister make beaded bracelets that afternoon, she must have shoved at least one bead up her nose. Chaos ensues.
You frantically search for tweezers while your spouse throws pepper in Sarah’s face, trying to make her sneeze. You beg Sarah to sit still as you try to pull the bead out, but you end up only pushing it farther into her nasal passage. Finally, you throw everyone in the car and race to the ER, where you watch in amazement as the doctor pulls not one, not two, but three pink beads out of your daughter’s nostril.
If this scenario sounds familiar, you’re not alone. I am frequently the doctor in this story, and just as often, youngsters stuff unexpected objects into their ears, too. 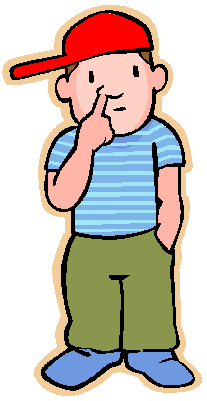 The “why” is simple: Kids stick stuff where it doesn’t belong because they’re experiential learners and because they’re naturally curious—about what it feels like, and about what will happen. Some children may also be motivated by the fact that they know it’s naughty, or because they think it’ll be funny. Trust me, I’ve seen it all in noses and ears: rocks, candy, paper, peanuts, crayons, buttons, and beads…and the list just gets weirder from there!
One thing’s for sure: Kids don’t anticipate the dangers (or, usually, the parental panic) that comes with a Lego lodged in a nostril or a pea shoved into an ear. And by the time parents become aware of the problem, it’s definitely no laughing matter.
Foreign (and often dirty) objects in a child’s nose or ears can lead to serious health risks. Those range from infections to blocked airways to punctured eardrums…things neither you nor your child wants to experience. And, of course, there’s the expense: co-pays, deductibles, and at times, general anesthesia.
Children under four are most at risk of getting into trouble with small objects. And that’s the general age range I target in Don’t Stick Sticks Up Your Nose! Don’t Stuff Stuff In Your Ears!, which is written for children ages two to six. With colorful illustrations and fun rhymes, this 22-page board book is the perfect way to teach your child not to put dangerous objects where they don’t belong.
Here, I share several prevention tips—and advise parents on how to proceed if something does get stuck in a little nose or ear.

How to Prevent Sticking and Stuffing From Happening

Talk about it. The best way to avoid a “What’s that in your nose?” crisis is to take the most direct approach: Talk to your child. Especially if you’ve noticed that your child has a tendency to put things up his nose or in his ears, explain to him that this is a major no-no. If it’s age-appropriate, emphasize the danger of putting things where they don’t belong and discuss what the consequences might be. This is where Don’t Stick Sticks Up Your Nose! Don’t Stuff Stuff In Your Ears! comes in handy: It gives parents a way to talk about ear and nose safety in a way that’s fun, memorable, and doesn’t feel like a lecture. (Your kids might even ask for repeat reads.)

Prevention and awareness are key. Often, kids are more receptive to this type of advice when you keep the conversation positive. And remember that it’s important to make this a family discussion. Teach older siblings that a baby’s ears and nose are delicate and that they’re not for poking things into.

Look at your house from your child’s point of view. Once or twice a day, it’s a good idea to check the floor, low tables, and under pieces of furniture for jewelry, toys, keys, and other small objects that may have accumulated. The more items that are out of place, the greater the risk to your child.

Stoop down (or even get down on your hands and knees!) and take a fresh look at your home from your child’s vantage point. Keep your eyes peeled for smaller objects that curious young hands (and noses and ears) might find interesting. If the temptation isn’t there, your child can’t stuff it where it doesn’t belong!

Store small objects out of reach. Once a child becomes mobile, it’s smart for parents and grandparents to thoroughly childproof their homes. From a small-object standpoint, I suggest taking no chances. Childproof latching mechanisms and locked containers are more than worth their price in terms of the stress they can save you.

Be sure to err on the side of caution. After the fact, so many parents say, “I had no idea my child could reach that high, or pull out that drawer, or climb up there.” You don’t want to wait for a visit to the ER to find out just how athletic your little one actually is! Specifically, I recommend keeping the following items in a high cabinet since they’re common up-the-nose or in-the-ear culprits: popcorn, peas, nuts, marbles, buttons, beads, batteries, magnets, toys with removable parts, safety pins, and coins. Oh, and one more piece of advice: Don’t forget about your trash can. Preschoolers don’t always share our aversion to digging through garbage!

Keep your eye on them. Our hectic, on-the-go, multi-tasking lives make it impossible to closely supervise our children every second of every day. That said, a watchful eye is still one of the best defenses against sticking and stuffing.

In particular, watch small children while they eat, since they naturally like to experiment and play with food. Encourage your child to sit quietly when eating and drinking. Sometimes, she may even listen! (Hey, I’m a parent of three; I know how this goes.) Another time to be especially vigilant is when your children are playing outdoors, since it’s impossible to childproof Mother Nature. Your watchful eye, coupled with an age-appropriate warning, can keep seeds, plant material, pebbles, sand, and other small outdoor objects from finding their way into ears or noses.

What to Do If Something Is Stuck or Stuffed

Know the signs. When a foreign object finds its way into a nostril or ear, you can’t always count on your child to tell you. An older child might be embarrassed or afraid of punishment. And a toddler might not even make the connection between the eraser he stuffed up his nose several hours ago and the discomfort he’s feeling now. That’s why it’s important to be able to recognize signs that something might be amiss.

Don’t panic. The realization that There’s a piece of kibble in my daughter’s nose! or She has a dime in her ear! can make your blood run cold. Yes, these situations are scary, but I promise that this happens all the time. So count to ten and calm down a bit before leaping into action.

Panicking will only make a bad situation worse. Take a deep breath and evaluate the situation. Ask your child what happened and if she’s in pain. Then, take a look and decide how best to proceed.

If possible, remove the object. If you’re fortunate, your child’s former “toy” will be fairly easy to dislodge. In other words, you don’t have to make a beeline for the doctor’s office the minute you notice something in a nostril or ear that shouldn’t be there.

Call the doctor. If you’re unsure about your ability to unclog your child’s nostril or ear yourself, it’s always best to err on the side of caution and let a medical professional do the honors.

If the object is difficult to remove or cannot be clearly seen, or if your child is in pain, call your healthcare provider first. When you explain the situation, they’ll be able to tell you if you should come in or go straight to the ER. In some cases, the doctor or nurse on call may even be able to talk you through an at-home extraction.

Try your best to help your kids understand that noses and ears are off-limits areas and to keep temptations out of the reach of little hands. And if sticking or stuffing happens anyway, don’t beat yourself up. As I’ve already mentioned, this happens all the time and does not make you a negligent parent—it just makes your kid a typical kid. Think about it this way: Years from now, after your panic has subsided, you’ll have a lot of fun telling Junior’s prom date about the time he decided to temporarily store a dandelion in his left nostril!

# # #
About the Authors:
Dr. Jerald Altman is the coauthor of Don’t Stick Sticks Up Your Nose! Don’t Stuff Stuff In Your Ears! He is an otolaryngologist-head and neck surgeon (ENT doctor) and was recognized as a Phoenix Top Doc in 2010, 2011, 2012, and 2013. Dr. Altman loves taking care of children’s ear, nose, and throat issues. After publishing many peer-reviewed journal articles, he recognized the need for a children’s book dealing with a common problem in his practice.

Dr. Altman is married with three children and lives in a suburb of . He enjoys woodturning as a hobby and climbs regularly.

Richard Jacobson is the coauthor of Don’t Stick Sticks Up Your Nose! Don’t Stuff Stuff In Your Ears! He studied architecture at Yale University and has spent most of his adult life designing interiors, landscapes, tablescapes, clothing, and just about anything else that can be fashioned in a creative way. He lives in , but since he travels extensively to play in duplicate bridge tournaments, he climbs considerably fewer mountains than his coauthor. Jacobson enjoys training dogs, birds, and topiaries in his spare time. 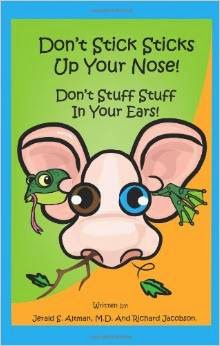 Posted by Editor/Publisher at 9:49 AM